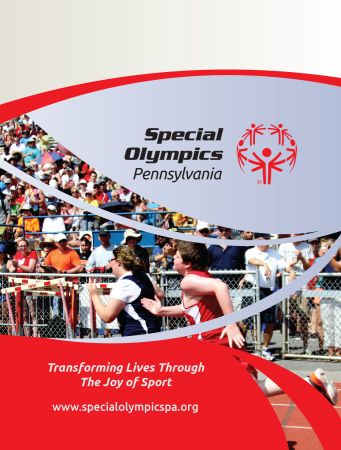 The mission of Special Olympics PA is to provide year-round sports training and competition in a variety of Olympic-type sports for children and adults with intellectual disabilities, giving them continuing opportunities to develop physical fitness, demonstrate courage, experience joy, and participate in a sharing of gifts, skills, and friendship with their families, other Special Olympics athletes, and the community.

All training and competition opportunities are provided free of charge to the athletes and their families, enabling everyone to experience the benefits of Special Olympics that extend well beyond the playing field.

The movement known worldwide as Special Olympics began simply as the idea of one extraordinary woman with a vision. Eunice Kennedy Shriver believed that people with intellectual disabilities were far more capable in sports and physical activities than many experts thought. And so, the world’s largest amateur sports organization began in 1962 as a day camp in the backyard of Eunice and Sargent Shriver, with the first International Games taking place in 1968. Today, the movement thrives in more than 172 countries throughout the world.

In 1969, 187 Pennsylvania athletes traveled to Maryland to participate in the Special Olympics Mid-Atlantic Invitational. It was not until months later, however, that these athletes would have a state program to call their own. In May 1970, the first-ever Special Olympics Pennsylvania (SOPA) competition was held when 135 brave athletes participated in a small track and field competition at West Chester University. Despite its size and scope, an official Special Olympics program came into being that day thanks to the dedication, determination and vision of event organizers and volunteer directors, Dr. Ed Norris and Hank Goodwin from West Chester's Physical Education Department. The event was funded by a grant from the Department of Special Education in Harrisburg and spurred increasing state-wide interest in Special Olympics’ mission in the years that followed.

Two familiar names in SOPA lore played a role in its beginnings, including one of Pennsylvania's most acclaimed athletes, Loretta Claiborne, who participated in athletics and the late former Chairman of the Board, Al Senavitis, who served as a timer during the West Chester track and field event. Making the program’s establishment particularly ceremonious, then-Governor Raymond Shafer designated May 24 - 30, 1970 as “Special Olympics Week” in Pennsylvania by marking the occasion with an official proclamation.

As the organization evolved through the 1970s, the competitions moved around the state, with various colleges serving as hosts, including Cheyney, Slippery Rock, and Edinboro Universities. In 1978, a milestone of significant note occurred with the appointment of Frank Dean as the first Executive Director of SOPA.

The organization grew rapidly through the 1980s as the staff grew, county programs were founded, and local events were held across the state. Similar growth continued through the 1990s and early 2000s leading up to current President & CEO Matthew B. Aaron taking over in November 2008. In the 11 years since, SOPA has enjoyed robust growth and is on the verge of a reorganization that will continue to draw even more athletes and volunteers to the program.

For 50 years, SOPA has used the power of sports to transform the lives of people with intellectual disabilities and unite everyone by fostering community and building a more acceptable and civil society. Through what has now blossomed into 54 local programs across the state, most of which are county or city-based, SOPA provides services that promote physical fitness and leadership skills development. Athlete Leadership Programs are offered to empower athletes to assume meaningful leadership roles, influence change within the Special Olympics movement, and create inclusive communities around the world. Through these programs, athletes take on roles as Global Messengers (trained as public speakers for Special Olympics), athlete representatives, coaches, board members and more.

Special Olympics also helps to address major challenges facing its athletes: obesity, healthcare and employment. Obesity is more common among individuals with Intellectual Disabilities (ID) than in the general population. Likewise, far too often persons with ID go without medical treatment, not by their choice, but because there are very few physicians, dentists, optometrists/ophthalmologists, and podiatrists that are actually trained in treating this population.

In response to these health challenges, SOPA provides free athletic training and competition year-round in Olympic-type sports for persons with ID. With sports at the core, Special Olympics directly addresses the problem of obesity by promoting healthy, active lifestyles. In addition, SOPA’s Healthy Athletes® initiative, a program offering free health screenings in the form of eye, ear, dental and podiatry assessments, is provided for athletes during select statewide Games. These screenings are conducted in fun, welcoming environments, and for some athletes, are the first time they have ever seen a doctor.

Additionally, SOPA strives to create a unified world by promoting inclusion, uniting communities, and changing attitudes. Through Unified Sports, SOPA brings together individuals with and without intellectual disabilities as equal teammates in training and competition. This growing statewide program builds fully inclusive schools and communities, promotes respect and acceptance, and facilitates meaningful relationships between people of all abilities.

The Special Olympics experience fills a critical need in the lives of people with intellectual disabilities by providing opportunities for physical activity, social interaction, and the demonstration of competence to themselves, their families and the community.  Athletes learn developmental and life skills as the benefits of participation translate beyond sports, helping them to live more independent and rewarding lives. Special Olympics also provides a positive venue for families, volunteers, and donors to become part of a caring community, and to become involved in the movement.